China’s industrial profits grow 2.4% through November
China has brought 1,731 grams of samples from the Moon
China will have the world’s largest radio telescope in January
China`s Factory growns
The unstoppable advance of Grupo Hormiga 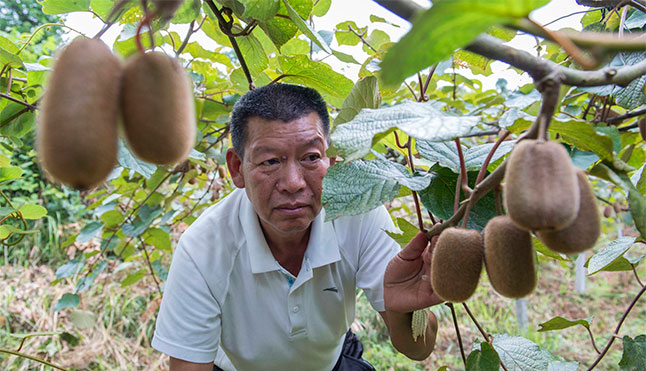 Although it is originally from China, the kiwi is not a fruit that in the West is usually associated with the Asian giant. But it is enough to walk to the top of one of the gentle mountains of Xiuwen County, in the southern province of Guizhou, to discover plantations of this fruit so extensive that they are lost on the horizon. Considering that this is one of the most impoverished territories in the country, it would be expected that farmers would work under harsh conditions and with the most rudimentary means. However, here and there, some surprising elements break the monotony of this green mass that covers more than 11,000 hectares. A video surveillance camera that transmits live through the 5G network, solar panels that provide power to sophisticated pest control systems, and sensors that collect data on all kinds of variables show that these farms have strongly embraced the technologies of the XXI century.

It is confirmed at the headquarters of the State Corporation for Development and Investment, a futuristic building on whose giant screens its head of Operations, Zheng Jian, shows the complex big data system that he has developed with a triple objective: to improve the productivity of the plantations and the quality of the kiwis, determine the best commercial strategy to sell the fruit at the most appropriate price at all times, and offer consumers a traceability tool that increases their confidence in the food.

In theory, all this should improve farmers' incomes and help the county achieve the great goal that China has set for this year: eradicate poverty, defined in 2010 as an income of less than 2,300 yuan (287 euros) per year. That amount has been adjusted for inflation and currently stands at about 3,100 yuan (387 euros). Between 2013 and 2018, the percentage of those living in Guizhou below that threshold increased from 26.8% to 4.3%, representing 1.5 million people.

“Technology is key to the efficiency of all sectors. Also from agriculture,”says Zheng. His company has managed to implement these data analysis systems in more than 5,000 small plantations and thus give consistency to the designation of origin of the Xiuwen kiwi, which belongs to the local Guichang variety. “Before, all farmers used different methods, fertilizers and pesticides. The fruit was of mixed quality and the prices were low,”recalls Zheng. "Now, since we started this project in 2018, we have managed to standardize agricultural processes and we are able to pay the fruit to its producers two yuan above the market price - currently around one euro for  kilo. It is complicated, because we are committed to ecological methods that many are not used to, but the incentive is sweet and we have achieved a more homogeneous quality, in line with what customers expect from a designation of origin”.

Zheng argues that sustainability is also key in this transformation: “The Chinese consumer, especially in large cities, is increasingly concerned about food safety and health. For this reason, we consider that ecological models are the best way to increase income”. And judging by the statistics it provides, the strategy works: last year, kiwi cultivation lifted 4,163 of the 360,000 residents of Xiuwen out of poverty, where around 10,000 tons of kiwi are harvested annually. Of these, 645 are small cooperative members who have their own plantations, and 3,518 are employed as seasonal workers on the plantations or work in the fruit sorting facilities. "And local authorities are confident of reaching their goal this year because the coronavirus pandemic has had little impact on the county.

This is corroborated by Zhou Zenping, owner of a kiwi farm. “We have formed rural cooperatives that help provide work, organize farmers, share knowledge, and force themselves against clients to obtain better prices. Most earn about 100 yuan a day (12.5 euros), that is, more than 2,000 yuan (250 euros) a month,”he explains in the simple concrete construction built at the foot of his plantation.

As if that were not enough, Zhou emphasizes that plantations organized in cooperatives help financially even those who, for some reason, cannot work in them. “Each inhabitant of the town has shares in the cooperative and, therefore, receives dividends at the end of the year. In 2019 we distributed more than a thousand yuan (125 euros) per person, including children. Thus, here we have already eradicated poverty and now the objective is to provide greater well-being ”, he says. A few meters uphill, the farmer proudly displays the first kiwis from his field. "They are already large, but the sugar level is still at 5.9 and we must wait until it reaches 12 to collect them," he says.

Along with the trees that perch on rows of stakes, Zhou points out some of the changes that the plantation has undergone since it joined the new exploitation system. “Before we used more pesticides and fertilizers, and we used them by eye. Now we have changed them to more natural methods to eliminate pests and everything is done following a scientific method ”, he explains while pointing to some sticky plastics that attract insects and the small wooden houses that they have installed so that their natural predators sit satisfaced.

Along with these rudimentary elements, a video surveillance camera serves as a contrast. Zhou shows the broadcast in real time on his mobile. “The images allow us to make a more complete follow-up of the ripening process and the situation of the pests, even on days like these, when the weather is very bad. And the data that they provide us with the system - and that can be consulted through an application - allow us to greatly improve efficiency”, he adds.

Zhou appreciates these advances, but shakes his head when asked if he understands how the system that is so helpful to him works. And you cannot blame him for anything, because it is not easy. “The data that the sensors collect automatically are used to determine the meteorological and land conditions at each point, as well as the degree of ripening of the fruit and the pests that affect it. The system analyzes them and suggests different treatments according to the needs of each plot. This information is also offered to fertilizer and pesticide traders to collect the necessary materials, the use of which is then accurately collected to determine the effectiveness of treatments and fine-tune algorithms, ”explains Zheng.

On the other hand, big data traces kiwi prices nationwide. "That makes it easier to price our products, making the best possible profit at all times. For example, this year, in Shanxi province, kiwi is paid on average to two yuan for every jin - a unit equivalent to half a kilo - so the system tells us that we can sell it for 4.5 yuan and not five. as planned, ”says Zheng. Finally, consumers can scan the QR code of their kiwis to access all the information about the fruit. Not only of the one they have bought but also of its history. "The data from the ERP software also tells us what type of kiwis they prefer in different places, if more or less sweet, and what packaging is the most appropriate," explains the head of Operations of the state corporation.

However, the system is still far from exploiting its full potential. Because of the 1,656 variables that they have identified to make it work perfectly, it still only collects slightly more than 300. "The difficulty is in automating all the processes to avoid manual data collection, which is much more imprecise," acknowledges Zheng. Another problem is in telecommunications networks, because in many places 5G has not yet arrived and farmers have to make do with the virtual network they have created, which has a high cost. "We hope to add several hundred more variables in a couple of years," Zheng advances.

The project is not just for kiwi plantations. The Corporation also uses it with other fruits, and the objective is to perfect it to spread it throughout the country. With only 12.6% of arable land and an unstoppable process of rural emigration, China is convinced that technology is the only tool available to increase the productivity of the countryside. For this reason, the last five-year plan (2020-2025) has set the objective that new technologies represent 15% of the added value in the primary sector. In parallel, the Communist Party also emphasizes the need to build an "ecological civilization." Not surprisingly, the fight against pollution is relevant because it is estimated that more than a quarter of China's arable land is degraded and produces well below its potential.

In any case, the data system is just one of the pillars on which an ambitious economic strategy rests that transcends the cultivation of kiwis. “We are trying to diversify the economy with organic chicken farms, which only eat cereals and vegetables, and tourist programs. For the people of the city, coming to pick the kiwis with their own hands is a good pastime and they pay a lot more. On my plantation alone, tourists take more than 50 tons a year. In addition, two kilometers of river have been enabled for bathing, and that also attracts people and creates jobs, ”says Zhou. Don't lie: on the shore, several stalls prepare snacks and rent floats and umbrellas. In October, they will also be filled with kiwis.